It's not all fun and games anymore, says Ramugondo 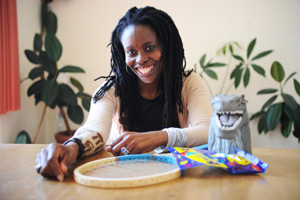 Play time: In her doctoral study, Elelwani Ramugondo of the School of Health and Rehabilitation Studies describes the generational divide in a family in which the understanding of 'play' has become complex.

PhD candidate Elelwani Ramugondo jokes that if you're looking for a photographic prop that best captures the findings of her doctoral research, a television set may be the most suitable.

An occupational therapist by trade, with an interest in the benefits, dynamics and philosophy of play, Ramugondo's work with one family in rural Venda gets her both fired up and worked up.

Over the three generations from grandmother to grandchildren, not only has the role of play in the family diminished, but it's also created a generational gap, she found in her study, Intergenerational shifts and continuities in children's play within a rural Venda family in the early 20th and 21st centuries.

As a young child in the 1930s, growing up in a family converted to Christianity, the grandmother's play was strongly influenced by her mission-school upbringing. Her family, school and the church collaborated to make sure that the activities she took part in fell within the bounds of what was proper for a Christian child. Her childhood play memories revolve around being a Wayfarer, the breakaway scout and guide organisation for black girls, run by strict rules and Christian principles. At the same time, 'heathen' children of the grandmother's age in Venda at the time played mahundwane, a very elaborate 'playing house' game, requiring big groups of children.

The church had a lesser influence on the games and play of the mother in the 1970s. Instead, the school exerted the greater power, as she dedicated most of her structured 'play time' to the majorettes.

In the current generation - for her study, Ramugondo concentrated on the nine-year-old boy and 12-year-old girl who were the offspring of the mother and her current husband - the idea of play is the most ambiguous, Ramugondo found.

While the children do play, it's become more tricky to define what play is for them, she says. Is it the structured activities at school? What about the time spent on games on their parents' cellphones? Or the hours whiled away in front of the television?

Gone for the children, notably, was group play with the neighbourhood children, or even with other family members. Little wonder then that the grandmother described her grandchildren as a lost generation, reports Ramugondo.

In part, rapid social change - democracy in South Africa, the world invited into the house through the television - meant that there was little sense of a "collective authoring of the unfolding play narrative in the family", Ramugondo notes. "The older generation, in particular, is rendered unable to mediate their children's play engagements, and can't keep up with the technology with which the children are quite comfortable."

That said, Ramugondo raises the notion of 'occupational consciousness', a concept borrowed in part from Black Consciousness.

"People are not conscious of how what they do feeds into the hegemonies that surround them, and they inadvertently perpetuate those hegemonies."