Gone fishing? No, gone to graduation 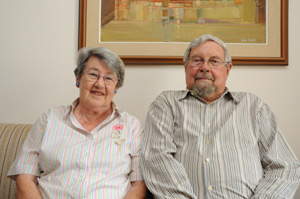 When it comes to marriage, the old joke suggests, the first 40 years are the hardest ...

Evidently, the same cannot be said about graduation. Just ask retired Professor Leon Kritzinger, who is preparing to attend his 40th graduation this year.

Kritzinger, also a former warden of Smuts Hall, says Commerce teaching staff are not famous for their dedication towards attending graduation ceremonies, a tendency of which he does not approve.

"As Dean, I found it very embarrassing to have a half-empty stage at graduation. And when I retired, I continued attending". He applauds the "remarkable changes" he has witnessed at UCT over the years, recalling that he was not allowed to register black students during the apartheid era.

However, Kritzinger did register a black student in 1973, and the person concerned went on to become the first black chartered accountant in South Africa, and later economic adviser to former president Thabo Mbeki.

"Chris Hani's daughter went through a BCom and was among the top ten in the final exam for chartered accountants in South Africa that year," he recalls.