Two worlds meet in a snap 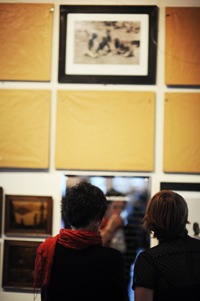 What the flip: The curators kept everyone guessing at the Shared Legacies exhibition.

A new exhibition at the Centre for African Studies (CAS) Gallery, Shared Legacies: The Alfred Duggan-Cronin and Edward S Curtis Photographs, brings together snippets from two photographic collections that, while worlds apart, also have much in common.

The differences are mostly geographical and cultural. The Duggan-Cronin collection is made up of thousands of negatives and photographs of the indigenous peoples of Southern Africa, taken between 1919 and 1980 and now housed at the MacGregor Museum in Kimberley. In turn, Curtis' collection of images of Native Americans, titled The North American Indian, was published over 20 volumes between 1907 and 1930, and is regularly exhibited in the US.

The common ground is that both aimed to document these indigenous groups on film just as the modern world began to - reportedly - threaten their traditional ways of life.

It was the US Consulate in South Africa that first proposed the exhibition, building on their growing association with the CAS Gallery. Gallery curators Siona O'Connell and Dale Washkansky - self-described "fledgling academics" - jumped at the chance to showcase the collections.

But as curators don't just hang pretty pictures, the two added their own interpretation to the works.

So, for example, some images were printed onto mirrors (so the viewers can see their own reflections in the photos), others flipped back to front (it's an act of censorship as some things should just not be shown, says O'Connell), while others have been spiced up with suitable sound bites from cultural theorists of the ilk of Susan Sontag, Roland Barthes and Homi K Bhabha. 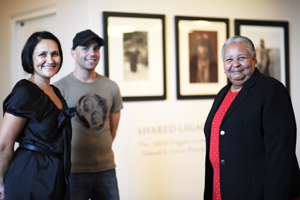 Memories: Curators Siona O'Connell and Dale Washkansky and US Consul General Dr Alberta Mayberry at the opening of Shared Legacies.

"We understand that there are problems showing such ethnographic images, and as such it demands a different approach," says O'Connell. "We want to engage and challenge the viewers so they come away from the exhibition feeling slightly uncomfortable, asking why have they done this?"

The approach worked on US Consul General Dr Alberta Mayberry.

"This brown paper is baffling me," said an animated Mayberry to O'Connell, referring to the brown paper that covered the back of the flipped photographs. "But it did make me talk."

And, added Mayberry, an African American, the images reminded her of her ties to her grandfather, who was part Native American.

"This is my shared legacy," she said.

The exhibition runs until 15 December.