"Face of Bremner" will long be remembered 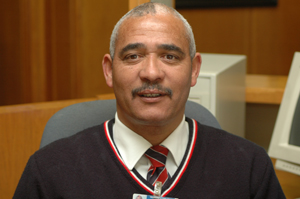 Many staffers and students will remember Davids as the charismatic front-desk security man who endeared himself to all who passed through Bremner Building.

Staffer Jenny Boyes said: "What a breath of fresh air and kindness Gerald was to his colleagues in Bremner. I will always remember his lovely voice singing down the hallowed corridors of the exec!

"I always enjoyed a chat with Gerald, who was a knowledgeable man with an enquiring mind. He was always willing to help and was great with visitors. He was my rock at work and his passing has left a deep void."

Her sentiments were echoed by colleague Anne Fereday. "Gerald was the heart and soul of Bremner Building. He always had a smile and a chirpy word of encouragement. He was a kind and good man, someone who I will miss more than words can say."

Colleague Denise Benjamin added: "Gerald was an absolute joy to each and every one who worked and passed through Bremner. I met Gerald when I started here in 2004 and he was more than just security. He was a true friend in every sense of the word. He always had time to chat and cheer me (and others) up. He was the 'sunshine on a cloudy day'."

Administrative assistant Debbie Wedel said: "Gerald had a good rapport with staff members and visitors entering Bremner and he simply loved the members of Council and greeted each by name.

"He was our Dr Phil, because very soon he would have you pour your heart out and he would listen very attentively and give you advice - sometimes not good advice because he had a naughty streak in him."

Davids joined G4S Security in 2000 and was deployed to UCT, first as a patrol officer on upper campus. He was promoted to Burnage controller in 2002. In 2004 he was transferred to Bremner Building.

G4S deputy operations manager Bernard Soules said: "There are two words to describe Gerald: inspirational and motivational. And that's what he brought to our team."

Davids is survived by Colleen, his long-time partner whom he married on 31 July this year, and children Shadley, Chandre, Cashe, Jerry-Lee, Jade and baby Jordan.