National Benchmark Tests create a stir - and a small storm 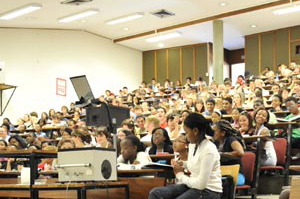 From the moment the results from the pilot National Benchmark Tests (NBT) were announced - actually, a copy of the report leaked early - they caused a few flutters among universities.

After all, the tests, conducted with just over 11 500 first-time entering students at seven South African universities* in February 2009, showed that about half of these students would need some form of academic support if they were to complete their studies. This came as no surprise, however, since several cohort studies have shown that only about half the students entering higher education leave with a qualification.

The tests looked at three areas - general academic literacy, quantitative literacy, and straightforward mathematics, based on concepts that are a part of the formal NSC curriculum. Students were marked as profi- cient (meaning they should succeed in higher education), intermediate (academic support would be needed), and basic (students have serious learning challenges, and bridging programmes would be essential).

Measuring academic literacy, just under half the students were found to be proficient, requiring no additional support. Quantitative literacy is even more worrying, as more than three-quarters of the students tested would need academic support. Most disturbing is that just 7.5% of the 9771 students who did the maths test were categorised as proficient (see graphs). UCT did comparatively well in the maths test, as only half of its students in the sample were identified as needing no or very little additional support.

That kind of surge in demand for academic support would, it's agreed, test the resourcefulness and resources even of universities with established support programmes, let alone those not so well-prepared.

And as 2009's first-year university students are the first graduates from South African schools' new outcomes-based education (OBE) curriculum, the dots from the NBT results were connected to the OBE's National Senior Certificate (NSC) qualification. "The final pilot phase of the National Benchmark Tests Project is a damning indictment of the implementation of outcomes-based education, and raises questions about the validity of National Senior Certifi- cate results," wrote The Star.

It didn't help matters that Professor Theuns Eloff, chair of Higher Education South Africa (HESA), the organisation that had called for the NBT, was widely quoted as saying that most university students could not read, write or comprehend at the required levels.

Not so fast, cautioned Professor Nan Yeld, dean of the Centre for Higher Education Development (CHED) at UCT and head of the NBT study. Yes, the NSC is not a usefulenough guide - on its own - to universities as yet, but both OBE and the NSC are still very new, notes Yeld.

"When you introduce a brandnew curriculum, and a brand-new qualification, there're going to be some teething problems," she says. Even Professor Joe Muller, education policy specialist with UCT's School of Education and one of those advocating scrapping OBE, agrees that pinning the current troubles on OBE is a bit of a stretch.

"The school system as a whole is still in poor repair and it will improve only gradually. So I don't think OBE can be blamed for what we are seeing now."

The NBT, first called for by HESA in 2005, was never intended to be a test of either OBE or the NSC, says Yeld.

"The NBT, actually, was not meant to say much about what's happening at schools. What it is trying to do is create a uniform set of instruments so that higher education institutions will know more about what they need to do."

The NBT, rigorously designed and tested, is a more revealing test of students' abilities, says Yeld. One of the main concerns raised about the NBT is that it would be applied by universities as extra "gatekeeping". Not so, says Yeld. Most universities already have some form of admission criteria or tests in place, she notes.

"There would be no more gatekeeping with the NBT than there is in the system already - the NBT is about higher education finding out as much as it can about students' educational needs."

And the NBT is not going to be the final word in student testing, says Yeld. Work is already under way to develop and fine-tune tests of potential, a means to find more students who can succeed at university. UCT will meet with faculty deans and faculty managers to discuss the NBT this week.