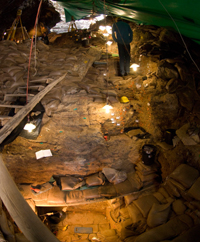 Stratigraphic layers visible in this lower section of the archaeological site at Pinnacle Point, Mossel Bay, date from 79 000 to 86 000 years ago. An international team, including two UCT researchers, has discovered evidence that early modern humans employed pyrotechnology to hone their stone tool-manufacturing process.

In the 14 August issue of the journal Science, in the paper Fire As an Engineering Tool of Early Modern Human, evidence has been reported that early modern humans living 72 000 years ago on the coast near Pinnacle Point, Mossel Bay, employed pyrotechnology - the controlled use of fire - to increase the quality and efficiency of their stone tool manufacturing process.

An international team of researchers, including Brown and Braun (Braun is Brown's principal supervisor and Professor Judith Sealy is co-supervisor), deduce that "this technology required a novel association between fire, its heat, and a structural change in stone with consequent flaking benefits". Further, their findings suggest our early modern ancestors were capable of complex cognition processes.

"We show that early modern humans - 72 000 years ago, and perhaps as early as 164 000 years ago, in coastal South Africa - were using carefully controlled hearths in a complex process to heat stone and change its properties, the process known as heat treatment," said lead author Brown, field and laboratory director in Mossel Bay for Arizona State University's Institute of Human Origins.

"This knowledge is then passed on, and in a way unique to humans, the technology is slowly ratcheted up in complexity as the control of the heating process, cooling and flaking grows in sophistication," added the Institute of Human Origins' Professor Curtis Marean, project director and a co-author on the paper.

This creates a long-chain technological process, the researchers explain, that requires a complex cognition, and probably language, to learn and teach.

The heating transformed a stone called silcrete, which was rather poor for tool making, into an outstanding raw material that allowed the early modern humans to make highly advanced tools.

"Here are the beginnings of fire and engineering, the origins of pyrotechnology, and the bridge to more recent ceramic and metal technology," said Brown.

According to Marean, the silcrete bifaces are re-usable tools with many potential functions: effective hunting weapons, excellent knives, and items of value for exchange.

"This explains why people would invest so much effort in wood collection and heat treatment for their production."

Marean said that the expression of cognitive complexity in technology by these early modern humans provides further evidence that this locality may have been the original location for the lineage that leads to all modern humans, which appeared in Africa between 100 000 and 200 000 years ago.

"There is no consensus as to when modern human behaviour first appeared, but by 70 000 years ago there was good evidence for symbolic behaviour. Many researchers are looking for technological proxies for complex cognition, and heat treatment is likely to be one such proxy."

(The team is working on the South African Coast Palaeoclimate, Palaeoenvironment, Palaeoecology, Palaeoanthropology Project, known as SACP4, funded by the National Science Foundation and the Hyde Family Foundation, and supported by Arizona State University.)