Agulhas Current to the rescue of the north 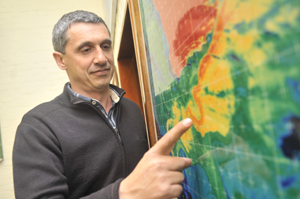 Water carrier: Dr Mathieu Rouault is among the UCT and European researchers who have built up a case for the not-inconsequential influence that the local Agulhas Current has on global climate.

For too long now, he explains, it's been taken for granted that if any ocean phenomenon has a say in weather conditions around the US and Europe, it's the Gulf Stream (the main current in the northern hemisphere) and its northern extension towards Europe, the North Atlantic Drift.

Not surprisingly, hardly a footnote has been spared for its distant, southern-based cousin, the Agulhas Current.

Originating in the Indian Ocean, the lusty Agulhas Current tears southward alongside the eastern coast of South Africa, negotiating its way past the Cape of Good Hope before taking a hairpin bend and, renamed the Agulhas Return Current, heading back into the Indian Ocean. Huge eddies and rings escape from the current and head towards Brazil, leaking Indian Ocean water into the Atlantic.

But down south a tireless bunch of oceanographers, helmed by members of UCT's Department of Oceanography with the support of visitors and funders from Europe, have slowly been building up a case for the mechanics, sway and prestige of the Agulhas Current. More to the point, they've been arguing that the current plays a key role in global ocean circulation by the way it regulates the exchange of water, heat and salt between the Indian and the Atlantic Ocean at the southern tip of Africa.

A new study hopes to cement that case by explaining the causes and details (changing atmospheric pressure and wind conditions) of the current's warming over the past 25 or so years in a paper, Warming of the Agulhas Current since the 1980s, published in the latest Geophysical Research Letter. The article is penned by UCT's Dr Mathieu Rouault of the Department of Oceanography, Pierrick Penven of the French Research Institute for Development (IRD), and Benjamin Pohl of the National Centre for Scientific Research (CNRS), also in France, as part of a South African/French partnership.

According to Rouault, the findings will have some telling consequences, not just for South Africa - the current has influence on local climate and weather, fish resources and ecosystems - but also for Europe. The export of heat and salt from the Indian Ocean into the Atlantic Ocean through leakages in the Agulhas Current has doubled over the past 25 years, he says.

"The good news for Europe is that the extra salt injected in the Atlantic will eventually make its way to the North Atlantic and counteract the potential effect of ice melting."

The fear exists that a surge of fresh water from the melting of the polar ice cap will dilute the Atlantic's salty waters, and in effect slow down the ocean's thermohaline circulation (aka the ocean conveyor belt or, these days, the meridional overturning circulation), which is driven by heat and salt ('thermo-' for heat, '-haline' for salt content) and carries warm water from the south to the north.

The build-up of salt in the Agulhas Current, and its transport north through the leakages, could compensate for the influx of fresh water from the melting ice cap, believes Rouault.

Others may take some convincing. To their disappointment, the writers' paper did not make it into Nature as they had hoped. They do, however, merit a mention in the journal's News & Views section.

That Nature column, which looks at a study of palaeoclimatic records from a marine sediment core in the southwestern Indian Ocean, also lobbies for the Agulhas Current's role in the Earth's natural cooling and warming. It may have an even greater hand, says the writer, than solar radiation and carbon dioxide (CO2) concentrations, the two-hander normally thought to be behind these climate swings.

The local findings open up new opportunities for research of both local and international relevance, says Rouault.

"Africa to the rescue," he says.