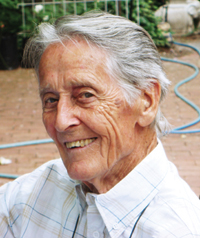 Graduating with a BSc in chemical engineering in 1949 and a PhD in engineering in 1953, Carr not only established the department in its current academic form but also led its formation and growth until 1990, when he took on the role of Deputy Vice-Chancellor. Carr also served as a trustee of the Montebello Design Centre in Newlands.

"He retained a close association with the department after his retirement, and even in very recent years made his presence felt on more than one occasion," said Professor Jack Fletcher, head of the Department of Chemical Engineering.

"On behalf of the department and its alumni, I wish to express to family and, in particular, to Andrew and Carol Carr, our heart-felt sympathies at this difficult time. The department mourns this huge loss, as you do."

"Donald Carr was a remarkable man," said Registrar Hugh Amoore. "He was a leading light in the Congress of Democrats in the early 1950s, having seen active service in World War II. Many of us owe much to Donald. I certainly do."