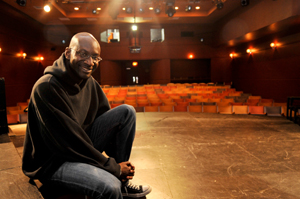 Renowned filmmaker Akin Omotoso (pictured) has taken up the drama residency at UCT's Department of Drama to work on projects with students and to interact with staff regarding the department's work and industry needs. Part of his residency was a public lecture, Did You Hear the Shooting Last Night, on 5 May, which was about four short films on violence.

Omotoso, who graduated from UCT in 1996 and won the Standard Bank Young Artists Award for film in 2007, has directed several shorts, including Gathering the Scattered Cousins, Jesus and the Giant, and the feature God is African. With his production company, T.O.M. Pictures, he has produced and directed television shows like Soul Buddyz, A Place Called Home, Sorted, and Nomzamo.

Why did you take up the drama residency?

I studied here at the School of Drama and if there is a way for me to come back and share information with a new breed of students, I'm always willing to do that. This seems to be the right vehicle to do so. I owe a lot to the school, and this is a way to say thank you.

What are you bringing to UCT?

I'm bringing what is out there. As a student, it is always nice to have people who are working in the industry to come share their experiences. I left the school in 1996 and have been involved in many aspects of the film industry, as a director, actor and producer, among others. So I'm bringing back what I have learnt.

What do you think of the local film industry?

The state of the film industry in South Africa is good. Obviously, there is a lot of passion and there are more opportunities. There are a lot of avenues to ply your craft and I think it is a proper way. When I left school I went to stage. Being on television was massive. Now you can go to stage, on TV, or teach media studies. The world is multi-faceted in terms of possibilities.

What are your future plans?

I'm involved in a lot of projects. I have just finished a documentary on Wole Soyinka, a Nobel Prize-winner for literature in 1986. Now I'm lecturing as part of this residency, and it is really good to be back.

What advice can you give to students?

If you have passion to do it, you will be able to move mountains. The trick is to arm yourself to be able to face challenges. But don't let challenges stop you from achieving what you want.