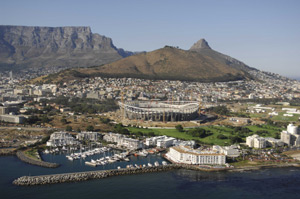 The importance of knowledge-sharing and networks as vehicles for sustainable development was emphasised at the launch of the first regional African Sustainable Urban Development Network (SUD-Net) in Cape Town on 18 February.

As Professor Edgar Pieterse, director of UCT's African Centre for Cities, commented, "making networks work requires a subtle alchemy of science and art". If the commitment and enthusiasm shown by the nearly 50 delegates from 10 African countries at the three-day workshop are an indication of a successful network, then it would seem that the magic is already at work.

Guest speaker Andrew Boraine, of the SA Cities Network and Cape Town Partnership, was excited by the promise of SUD-Net.

"The urban question is still very under-recognised, particularly in Africa," he said. "In our own country, when we point out that most of the poor live in urban areas, people still get up and ask about rural and agricultural development.

"There are still a lot of myths about urban areas. The emphasis on rural development means that cities are often seen as problems rather than solutions," he said.

According to Boraine, one of the problems was that the relatively high average wealth of cities masks the huge problem areas of urban poverty and unemployment.

"So the national policy tends to see cities as cash cows rather than as places needing investment," he said.

"We want to support initiatives that use a multisectoral approach to give people a platform to fulfil their dreams," said Thomas Melin, lead urban specialist for the Swedish donor agency SIDA, one of the hosts of the workshop. "We've noticed that many dreams are urban, but in Africa we haven't found many institutions we can work with that acknowledge the strength and relevance of cities."