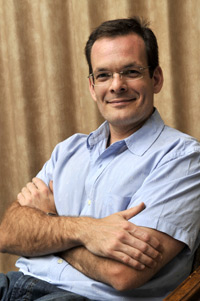 It's not often a lecturer finds himself in the same class as some of his students. As a fellow student, that is.

Associate Professor Landon Myer, an epidemiologist in the School of Public Health & Family Medicine, was among scores of MBChB students who graduated last week.

At 34 he's about 10 years older than the class average. But age and experience have given him an interesting vantage point, he says, the students' enthusiasm reminding him how easy it is to become "closed-minded" and jaded as a researcher and academic.

"It was fun and I developed some close friendships," he said.

While coping with the demands of medical studies, Myer worked as a part-time teacher and researcher in the school.

His research there focuses on the roles of infectious diseases (including HIV/AIDS, TB and sexually transmitted infections) in shaping individual and population health in southern Africa.

"I'm particularly interested in how the HIV epidemic influences other areas of population health, including women's reproductive health and mental health."

With his work grounded in the 'macro' elements of public health, the MBChB shifted his focus back to the health of the individual. It's an important balance, he says.

He's enjoyed a somewhat convoluted academic path. A South African-American (he was raised in the States), his first interest was in botany (his office in the Falmouth Building is shared with numerous potted plants). In the mid 1990s he completed an MA in social anthropology at UCT and then became interested in the social aspects of HIV.

He went to work at the Medical Research Council in KwaZulu-Natal and from there he left for the States, where he completed his PhD in epidemiology at Columbia.

With a brand new medical qualification to add to his credentials, Myer pays tribute to the faculty and school's flexibility in making possible his dual academic life, particularly stalwarts like Rodney Ehrlich, Leslie London and Jonny Myers, for their support.

"It couldn't happen anywhere else."