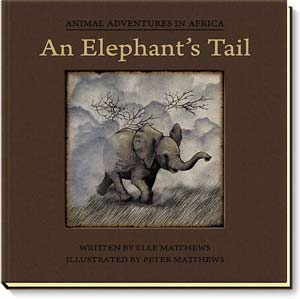 They say discipline children while they are young enough to learn, and Elle Matthews strives to do so.

The UCT graduate has recently released a book, Elephant's Tail, which challenges children between the ages of 7 to 10 to take an active role in wildlife conservation.

"Many wildlife conservation programmes are focused on saving the natural resources of the earth for future generations, but children need to participate in this as much as possible, from an early age," she explained. "Our children need to become aware that the future of the planet lies in their hands. They have the power to change their world."

The book is the first title in the Animal Adventures in Africa series, which is comprised of books, products and an interactive website, all aimed at young children.

The series focuses on the escapades of five young animal friends living in a game reserve somewhere in Africa: Lee O the lion cub, Bongo the baby baboon, Vile the little vulture, Hevi the hippo and Manji the young meerkat.

The book tells the story of how the group sets out to save a little boy from a pack of hyenas, get caught in a bush fire, and end up rescuing an elephant calf orphaned in the fire.

Matthews said she targeted children because many of them will never experience wildlife up close and personal because of cost, the fact that many game lodges in Africa do not take children under 12, or because their parents are not interested in this type of holiday. "This means that they may never get to love or understand wildlife, and the importance of protecting animals in their natural habitat."

Matthews also wrote Oil on Water, published this year, and is the screenwriter and producer a feature film of the same name.