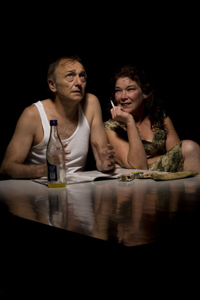 Directed by Mark Graham, this new production, when it premiered in Johannesburg earlier this year, was said to "have done Fugard proud".

"When asked to name my favourites among the 50 years of playwriting that lie behind me now at the age of 76, Hello and Goodbye is without fail one of the three that comes to mind," said Fugard, who has been described by Time magazine as the greatest active playwright in the English-speaking world.

The powerful and gripping twohander, as pertinent today as it was when it was written in 1965, brings Gould and Maxwell, both 2008 Naledi Award winners, together on stage for the first time.

Set in the kitchen of a railway house in Port Elizabeth in 1963, the play softly cauterises the wounded lives of its characters. A brother and sister who have not seen each other for years, unpack boxes and suitcases in search of an elusive inheritance, and in so doing unpack the memories and truths of their empty and damaged lives.

The play is classic Fugard, unashamedly South African, placed in the environment in which he grew up among the ironies and dichotomies of life in South Africa at the time.

Hello and Goodbye previews at the Baxter Sanlam Studio on October 7 and 8, opens October 9 and runs until November 1, at 20h15 nightly.

Booking is through Computicket on 083 915 8100, online or any Shoprite/ Checkers outlet. For discounted block, corporate or school bookings, charities or fundraisers, call Sharon on 021 680 3962.