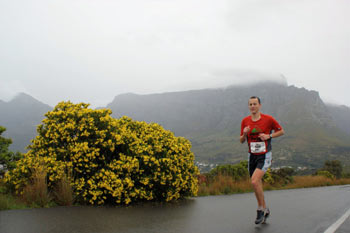 Call William Robinson the King of the Long Haul.

After a record-dashing win in the Men's Health Hout Bay Trail Challenge in July, Robinson took top honours in the no-frills Salomon Puffer - no prize money and no fame, promise organisers - in late August. This is the second win in three years at the 80km, Cape Point-to-Waterfront race for Robinson, who finished in 07:38:06, a goodly 35 minutes ahead of second-placed Olivia Read.

And it was tough going on the day, with only 11 runners crossing Table Mountain before marshals decided that conditions "on top" had become too icy for them to remain at their post and racers were re-routed.

It's been a change of pace for Robinson this year, who's cut down on his cycling to concentrate on trail running. After six wins in significant Western Province races, he figured he'd gone as far as he could on two wheels.

"Maintaining my form became unsustainable," says Robinson, a doctoral student in the Department of Mathematics and Applied Mathematics, (that's him in the red taking on Signal Hill in the Salomon Puffer race). So now, cycling is limited to commuting and a monthly Sunday morning coffee ride - when the sun is shining.

"With my attributes, I can challenge both myself and the top athletes in the discipline."