UCT rolls up its green sleeves 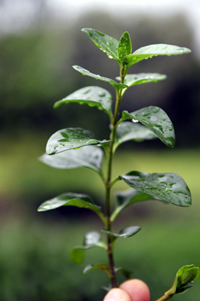 As UCT alumnus Gordon Lewis Pugh prepares to kayak to the Arctic this month to highlight conservation, UCT is rolling up its sleeves for the cause by going green.

UCT hosts its first Green Week from 4 to 8 August, a student-run initiative endorsed by the university as part of the wider, long-term Green Campus Initiative. This falls under the umbrella of the Green Campus Plan, a policy framework endorsed by Senate.

The greater plan is to shift UCT to becoming a carbon-neutral, environmentally conscious organisation, tapping the energies of staff and student volunteers.

The Green Campus Initiative started out as the Department of Botany's own plan to address climate change. They've been recycling successfully for over a year.

With some good marketing on Vula, the initiative gathered momentum on campus, attracting support from UCT's Earthlife Society and the Properties & Services Department.

"I'm delighted to see the students taking the initiative on this important issue," Vice-Chancellor Dr Max Price said. "This is student activism in another guise. The cause is extremely important to us as a campus and concerns every one of us as responsible citizens."

From the institutional side, several projects are under way, under the watchful eye of Brett Roden, UCT's new environmental officer in Properties & Services.

Members of the UCT community may already have noticed the clusters of recycling bins around campus, both in the open spaces and within buildings and residences.

These will take plastic, paper, glass and tins, with the bin lids colour-coded accordingly.

Properties & Services is in a tender process to appoint a waste-sorting company until the multifunctional cycling plant planned for the Southern Suburbs is on stream.

A recycling road show will visit each building to outline the "green plans".

"It's not just about recycling waste," Properties & Services executive director John Critien said. "It's also about a bigger picture, including fuel and electricity hikes. We have to cut down now because UCT is also feeling the pinch."

But back to Green Week, starting today.

Don't be surprised if you're "ticketed" by the Green Police (students in green overalls) for driving onto campus as the sole occupant of your car.

They're simply trying to get you to join the Ridelink Initiative, a web-based programme that allows staff and students to carpool.

This initiative will be launched at the Sustainability Expo in the Jameson Hall today (Monday, 4 August).

A number of other projects are linked to this campaign, such as the Sustainable Kramer Building Programme, including a series of documentaries, one examining the rift between Western cafÃ© society and impoverished Ethiopian coffee growers.

But there is one initiative in the Green Week campaign that shows just how high the stakes have become.

You can also expect to see the UCT home page go green - literally.