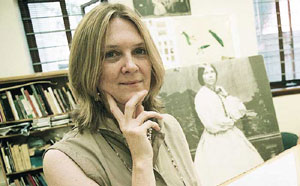 Director of the Michaelis School of Fine Art, Professor Pippa Skotnes, will receive a Doctorate of Literature from UCT at this week's graduation.

Skotnes' work has focused on the Bleek and Lloyd Archive and "on the visual as a site of interpretation". It proposes that research potential may be limited by a dependency on text alone and that interpretation is enriched by expanding the ways in which research is expressed in publication.

In its focus on scholarship, it offers ways in which the division in the human sciences between practice and accounts of practice might be broken down, and the richness and complexity of human society might be reflected through the methods employed to understand it.

This senior doctorate recognises the recipient's lifetime contribution to scholarly publications. Skotnes is one of only a handful of graduates to have received a DLit at UCT. Only three have been awarded by UCT since the 1940s. And Skotnes may be the last, as senior doctorates could well soon be phased out.