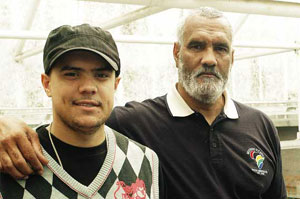 Karl Frederick Buckton, son of one of UCT's long-serving employees, Peter Buckton, has beaten all the odds to finish his BSc degree.

First, he was born in what his father described as "my revolutionary days" in 1987, when the political struggle was at its peak.

"That is why I named him Karl Frederick, after Marx and Engels," he explained.

Then, he grew up in Mitchell's Plain, where drug-dealing and gangsterism is rife.

"That is why I feel proud of him," Buckton senior said. "He could have slipped out and got involved in tik or gang activities. But he set his sights and got education to prepare for his future."

Buckton senior also obtained his BA from UCT in 1992 and has worked for the university for 37 years. Having started as a cleaner, he moved on to laboratory assistant and technical officer in the microbiology department before becoming a sports administrator.

Buckton junior has been accepted to do his honours in environmental and geographical science next year.