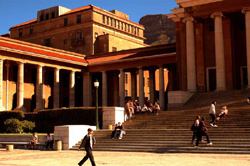 The following is a report from the last meeting of Council.

Appointment of a Vice Chancellor

A record number (171 members remained for the vote) crammed the Senate room on 4 October 2007, to consider the report of the chair of the Selection Committee, and to vote on the question: Do you have confidence in the recommended candidate? The vote was 81.8% in favour.

Council held a special meeting on 10 October 2007 after the Institutional Forum had certified that the approved process had been appropriately followed, and voted to appoint Dr Max Price to be Vice-Chancellor from 1 July 2008. The appointment was announced on Friday, 12 October 2007.

The October Council meeting dealt with proposals from the Finance Committee for operating, capital and student housing budgets for 2008. The approved operating budget provides for expenditure appropriations totalling R1.35 billion. The budget shows a small (less than 2%) deficit before taking into account net investment income.

This budget does not include the very substantial volume of research expenditure funded by research councils, foundations and contract revenues. Council approved a capital expenditure programme that will see R46 million spent on infrastructure in 2008, and Council has set on track the capital programme for a few new projects - an extension to Menzies Building, a building for economics on the middle campus, and a student services building on the lower campus - costing R185 million over the next four years. Of this, R140 million will come from the state.

The residences are a critical part of UCT's operation, providing accommodation for nearly 6 000 students. Alternative accommodation is becoming increasingly difficult to find in Cape Town, and the conditions in residences make the difference between success and failure to very many students.

Council is aware of this, and recognised this when approving the student housing budget for 2008. It provides for expenditure of R140.7 million in 2008, and is the single largest divisional budget.

Monday Paper of 9 September 2007 reported the Council decisions on fees for 2008. Fees are a critical part of revenue and Council has, with the support of the outgoing Students Representative Council, decided to plan fee levels over three-year rolling cycles. At this Council meeting, the Council constituted a committee that will see how this might be done and a reference group to work with it.

Internal controls, the management of risk, and ensuring that financial statements fairly represent the university's financial position are the meat and drink of one of Council's key committees, the Audit Committee. The October Council meeting considered an important report from the Audit Committee. Among the issues dealt with were:

The procedures for appointing deans, DVCs and VC have continued to evolve. They are complex and recognise the complex responsibilities deans, DVCs and the VC have and the internal and external constituencies to whom they relate. With this in mind, Council has set new procedures for deans; approved as a working draft a set of new procedures for DVCs; and agreed to review the VC process in the light of the current experience. This review of the VC selection process will enjoy the attention of the Exco in November, and is expected to take the views of the selection committee and of the shortlisted candidates.

At the same time, Council has initiated a review of what role it should play in considering senior appointments proposals. On the one hand, it is not the selection committee; on the other it does not wish to be, or to be perceived as being, little more than a rubber stamp.

Jammie Shuttle and the taxi/transport industry

Council has received reports on the talks aimed at securing a working relationship with taxi operators along the Claremont Main Road route, and has appointed a reference group of Council members to assist where needed.

Council has noted that UCT was awarded 19 new National Research Foundation-funded posts under the SARChI programme and has extended its congratulations to those who have won these posts.

Among other matters that received Council attentions were: