Merger is a step up for robotics research 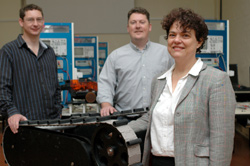 Dr Anet Potgieter, Graeme McPhillips and Stephen Marais of UCT's new Agents and Robotics Research Laboratory believe this will be a reality by 2050.

The merger brings together the complementary research and skills around robotics hardware and artificial intelligence, the latter based on computational intelligence, self-awareness and emergent behaviour modelling.

At the launch Marais joked that the Robotics Research Laboratory team had been creating rescue and inspection robots - and even small soccer robots - for some time but hadn't been able to stop them running into walls.

Beyond the common sci-fi perception of robots, fanned by popular culture (think of the box-office hit I Robot), robots are increasingly being used for a host of applications, from inspection robots that cling to the hulls of super tankers, to pipe inspection robots to check for corrosion or cracking in pipelines.

"We send them in to collect data that will tell rescuers whether it's safe to go in," Marais said.

With 2010 in sight, it seems wholly appropriate that the new laboratory will conduct international research using the vehicle of RoboCup, an international joint project to promote artificial intelligence and robotics.

"This competition aims to develop autonomous robots to promote research and education in the field of artificial intelligence," Potgieter said.

"We are collaborating with German knowledge-based systems group, Aachen, and Austria's Graz University of Technology to participate in the international RoboCup."

Apart from participating in the RoboCup international competition, they're working to establish the RoboCup Standard League in Africa.

The international competition demands more. The team is hoping they will be one of 12 international bidders for a team of Nao humanoid robots from French company Aldebaran-Robotics.

These have been chosen as the new standard platform for RoboCup.

Potgieter says they are hoping to compete in the RoboCup World Cup in China next year, using the Aldebaran Nao platform.

"If so, we've got some hard work ahead of us and some tight deadlines."

They also have plans to compete in the RoboCup Rescue league.

The remaining question is: will we see robotics and artificial intelligence combine to produce consistent umpires and referees?