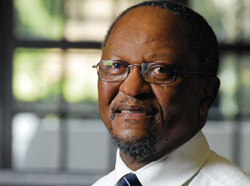 "It then strikes me that from the perspective of transformation, the mechanisms of debate and discussion may be as important at the issues themselves."
"It seems to me that we do not necessarily bring to our debates shared assumptions about how debate actually ought to be carried out. This might be a key transformation issue..."

The recent affirmative action debate on campus has raised questions about "cultures of discussion" at play at UCT.

As the Respect project unfolds, four recent events are still on my mind. The first was Professor David Benatar's inaugural lecture on the topic of affirmative action. Rarely has an inaugural lecture generated so much public discussion.

The inaugural lecture was followed by an internal UCT debate on the same topic, between Professor Benatar and Deputy Vice-Chancellor Martin Hall, moderated by Associate Professor Pumla Gobodo-Madikizela. This debate took place under the Respect programme launched earlier in the year.

There was also a lively intranet debate that took place within the UCT academic community.

Lastly was the public debate that ensued in the media. It was spread over several weeks. One moment I recall is when one reader in a letter to the editor wondered why this debate among UCT academics was playing itself out in the public domain and not on campus. While not accepting the implication that UCT academics should not be taking up issues of importance in the public domain, I thought further about that reader's observation from a different perspective.

It has to be acknowledged that the issue of affirmative action hinges so centrally on how sustainable our transition to a non-racial democracy will be. For the purposes of my reflection on this issue I do have to confess first: that I have never been very comfortable with the expression "affirmative action." It is a discomfort of many years during which I have believed the expression was not entirely applicable to the South African situation. I believed that what South Africans needed was national liberation far beyond the American quest for affirmative action. The thrust of the former I understood to be essentially transformatory, whereas the latter was concessionary, or at best reformatory.

If this angle makes sense, then the issue at stake in the debate is whether our experience of the pace of transformation has reached a point where the imperative of liberation can comfortably give way to some policy and regulatory adjustments that do away with race as the measure of progress in redress in such a way that the recently enfranchised majority's sense of comfort can allow them to dispense with the constitutional measure of fair discrimination.

The precise point at which this could happen will not be easy to determine. But we do need to test regularly the extent of our readiness. I believe that Professor Benatar's contribution was one such test, and useful at that. But the test has to do not so much with the substance the debate as such, as it is with the methods of debate such that the experience of debate itself may tell us just how far, as the UCT community, we have come to the point I have referred to as "the enfranchised majority's sense of comfort". I am of the view that what the debate suggests is that we may not have reached that point yet. And here we get to the point of my reflection.

What are the dominant trends and currents of opinion at UCT? Where and how do they interact? From a transformation perspective I would have to pose another question: more than the arguments deployed, what are the levels of social and intellectual trust that support debate at UCT?

This question interests me in the light of my desire and hope that this and other vital matters that face our country will continue to be debated at UCT with the same intensity of interest. It then strikes me that from the perspective of transformation, the mechanisms of debate and discussion may be as important at the issues themselves. The focus of my reflection is on the nature of debate and other forms of interpersonal speech acts such as "discussion" and "conversation".

The question is how did the debate both on campus and in the public domain contribute to the Respect programme? Beyond that, how did it contribute to the objective to transform our institutional culture? I believe these are questions still to be answered. My initial impression is that the debate shows that while the horizon for open and honest debate on issues of great sensitivity has extended somewhat, more needs to be done to push the boundaries further. The challenge is to deepen this process.

Doing so prompts further questions. How do we meaningfully engage in debate on contentious issues in a campus environment undergoing transformation? More significantly, how does that "undergoing" in itself, get to be experienced? Such experience pertains not only to the issue of contention (in this case affirmative action), but also to how we actually engage with the methods and conditions of debate. It seems to me that we do not necessarily bring to our debates shared assumptions about how debate actually ought to be carried out. This might be a key transformation issue, and here's how I am thinking about it.

It has occurred to me that while the public debate in the newspapers was to be welcomed, it could be deemed to have taken place in a relatively distant space in which the contestants could take positions without the benefit of witnessing the immediacy of verbal impact and its consequences on relationships. Did the public debate deprive us of the experience of a live debate on what is clearly a contested issue? In other words, did the distance of newspaper articles possibly mirror a communicative distance between colleagues on campus, protecting us from experiencing the social impact of live discussion? Isn't the live discussion the real challenge of the respect programme?

The same questions could be asked about cyberspace debates.

I have then wondered how the dynamics of a debate on affirmative action could have taken place between graduates of the khuluma workshops.

I am asking these many questions because I believe more needs to be done to explore and experience the transformative potential of live debate on 'difficult' issues on campus and beyond. Perhaps at issue is the notion of collegiality itself.

How does debate enhance collegiality? By collegiality I do not mean "easy agreement and false accommodations". The collegiality I have in mind is an approach to discussion in which the participants share the desire and passion to know what the other thinks, feels, and will say so that everyone can engage with the thoughts that have been expressed in mutually probing ways that reinforce the spirit of discussion rather than threaten it.

It seems to me that we need to pay a more self-conscious attention to what possible "cultures of discussion" are currently at play at UCT, and which new ones are possible. These may range from those that depend on "holding forth with resoluteness and conviction", on the one hand, and on the other, those which plod through tangles of thoughts and feelings, doubts and hesitancies, until clarity finally emerges. We may have a continuum from aggressive contestation to exploratory, tentative conversation. I suspect all forms within the continuum have their uses. But which of them may best help us reach higher levels of creativity and innovation as an institution that seeks to find the best way of achieving a transformative academic environment?

We have, at any rate, been through what was truly an engaging and challenging moment. I express my appreciation to all those who participated: speakers, writers, readers, and listeners. I hope we can continue to explore the full creative possibilities of whatever culture of campus discussion we deem appropriate to our times.