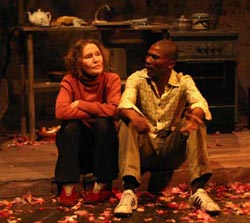 Following successes at the Theaterformen festival in Germany and the National Arts Festival in Grahamstown, Lara Foot Newton's latest play, Reach, is on at the Baxter Sanlam Studio.

The show by the renowned director, producer and writer opened on July 12 and runs until August 11. Reach explores the themes of isolation and longing, and brings together two individuals from opposing traditions, cultures and backgrounds.

The play showcases Aletta Bezuidenhout as Marion Banning, a lonely woman whose son died in a violent crime. His death is followed by a divorce and the migration of her grandchildren. Solomon Xaba, played by Mbulelo Grootboom, has also lost relatives and helps her find peace.

The Winner of the prestigious Rolex Mentor and Protégé Arts Initiative in 2004, Foot Newton has co-written over 20 plays and one film. Reach is her third solo play.

The play was inspired by conversations with psychoanalyst Tony Hamburger, she says.

"It was born in a time of depression in our country and was motivated, in a sense, by a time in Cape Town when South Africa felt desperate both politically and socially. Sifting through all this, I found a symbol of life that exists in unlikely relationships.

"It is that relationship which I explore in Reach."