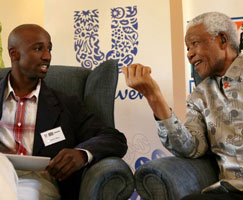 Ben Matai, Associate in Management (AIM) 2006 graduate from the Graduate School of Business (GSB) has been awarded a prestigious Nelson Mandela Scholarship, which will allow him to pursue an MBA in the United Kingdom.

Sponsored by Unilever South Africa and Deloitte, the scholarship seeks to attract young people who have already demonstrated strong leadership capacity, be it in politics, business or community work.

Matai, currently with Anglo Coal South Africa, was one of only 14 candidates out of about 1 000 applicants to receive this accolade. The winners were announced in April, and were introduced to Nelson Mandela.

"I never believed it possible that I would meet Nelson Mandela,' said Matai. 'The experience has made me realise that the possibilities in life are endless."

The scholarship covers tuition, accommodation, food and travel costs for a year and Matai is applying for admission to a number of leading UK business schools, including those at Oxford and Cambridge.

"I am excited about the opportunity to study abroad as I have never been overseas,' he said. 'Travel is a great teacher, and there is a lot of personal and professional growth to be gained from studying in a foreign country.'