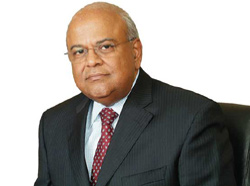 Pravin Gordhan, commissioner of the South African Revenue Service (SARS), will receive a Doctor of Laws (LLD, Honoris causa) at the mid-year graduation ceremony on 15 June.

The honorary degree of recognises Gordhan's stellar contributions to South Africa, both as a political activist and, in a democratic South Africa, as a Member of Parliament and commissioner of SARS.

"It is an honour for the University of Cape Town, always striving to be a leading university in the country, Africa and the world, to be associated with a leading figure such as Mr Pravin Gordhan," said Vice-Chancellor and Principal, Professor Njabulo S Ndebele.

"Whether as a student activist, a negotiator at the forum that lay the blueprint for our nation's future, or as the head of a pivotal state structure, it is obvious he never shied away from challenges. As a role model for our students - of whom there will be many generations to come - we certainly could not have asked for better."

Gordhan cut his political teeth in the South African student movement, where he led peaceful campaigns against racial segregation and inferior education. He trained as a pharmacist at the University of Durban-Westville (now part of the University of KwaZulu-Natal) and worked at King Edward Hospital in Durban. But he was later arrested for his involvement in the anti-apartheid movement.

(In 1999, four former members of the Security Branch in Durban appeared before the Truth and Reconciliation Committee (TRC) for the assault on Gordhan and another activist in July 1990.)

Between 1991 and 1994 Gordhan moved from activist to senior negotiator when he chaired the Convention for a Democratic South Africa (CODESA) Management Committee. The body played a crucial role in steering South Africa to democracy. Gordhan also acted as co-chair of the Transitional Executive Council, the governance structure that oversaw the country's transition process prior to the 1994 elections.

"He played a very important role in the negotiations in Kempton Park in 1993," said Professor Hugh Corder, Dean of the Faculty of Law.

From 1994 to 1998, Gordhan served as a Member of Parliament as a representative of the African National Congress (ANC). Not only did he play a leading role in drafting the South African Constitution, but also served as chairperson of the Parliamentary Constitutional Committee.

In 1997 Gordhan led a team of political representatives and experts that formulated the government's new policy for local government.

He joined SARS as deputy commissioner in 1998, rising to commissioner in November 1999. One of his main tasks was to transform the country's customs and revenue administration, a strategic state institution.

In his acceptance letter Gordhan wrote: "Thank you for the recognition you, as a leading, world-class university, have bestowed upon the political activism that has contributed to our freedom and the work of public sector institutions such as SARS, that today help to consolidate our democracy."

View the rest of the Monday Paper special Graduation and Youth Day edition.