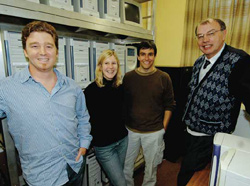 Bruce Becker, Sarah-Louise Blyth and Mark Horner have come a long way together, from first-year physics classes to joining Professor Jean Cleymans' groundbreaking heavy-ion physics group to working at the world's foremost labs and, this year, capping their PhD work.

Becker, Blyth - the first woman to receive a doctorate in experimental physics from UCT and, likely, the first from an African university - and Horner signed up at exactly the right time. Back in 2001, Cleymans had just joined the A Large-Ion Collider Experiment (ALICE) of the European Organisation for Nuclear Research (CERN), the world's largest particle-physics lab based in Geneva, Switzerland. Since then, the three have either helped out in Switzerland or have done hard time at the prestigious Lawrence Berkeley National Laboratory in California in the US.

Now CERN is but months away from going online and the three, along with physicists across the world, are rubbing their hands with glee. CERN will take the work they and other physicists around the world have done thus far - picking up traces of whatever new particles are formed when, say, gold ions are smashed into each other at dizzying speeds - to the next level.

At CERN, scientists will study the building blocks of matter and the forces that hold them together, speeding particles up to almost the speed of light in its accelerators.

"We're all starting something brand new, and nobody really knows what's going to come out of it," says Becker.

Blyth is taking a break from studies for a while, but Becker is scheduled to visit CERN again in the near future to monitor the actual collisions in the CERN accelerators. And in his new job at the nearby Centre for High-Performance Computing, Horner is likely to join the global network of scientists that will process the vast amounts of data expected to come out of CERN.

Cleymans is impressed by his young wards. Since those early days in 2002, the three have worked at the world's leading facilities, spoken on four continents and rubbed shoulders with pioneers in the field.

"In the beginning I was sceptical because we were starting a completely new direction," he says, "but they've made a real impact."