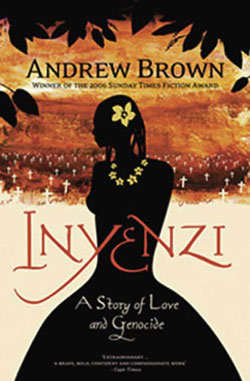 Advocate-cum-writer and UCT alumnus Andrew Brown had to pay out of his own pocket to see his first novel, Inyenzi: A Story of Love and Genocide, into print in 2000. The book sold briskly, but until recently the author had only two copies left on his shelf, making him feel at times, he says, that the book did not exist.

The book has now hit bookshelves around the country.

"It was really gratifying to see Inyenzi reprinted - with a beautiful cover and a decent edit," says Brown. "To see it now proudly displayed in bookshops is really wonderful for me."

Back in 2000, however, Inyenzi's subject matter had scared off publishers. The book tells two stories - one of forbidden love, the other of the bonds of friendship - set against the 1994 genocide in Rwanda. One critic described it as "a multilayered story of love, conflict, politics, hatred and sacrifice".

"What is most powerful about Brown's successful endeavour is that he does not fall into the trap of depicting Africans as hopeless in the face of suffering," writes critic Vuyo Sokupa. "Instead, he shows without favour Africans' strength and resilience."