Doubt at the Baxter 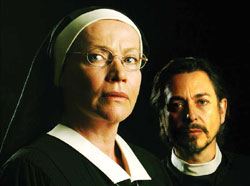 Shaken faith: Sandra Prinsloo and Jeremy Crutchley lead a stellar cast in Doubt, now on at the Baxter.

Directed by Janice Honeyman, the line-up for the four-hander is Sandra Prinsloo as Sister Aloysius, Jeremy Crutchley as Father Flynn, Tinarie van Wyk-Loots as Sister James and Ilse Oppelt as Mrs Muller, mother of the minor.

Doubt is described as a sophisticated deliberation on blind faith and moral certainty. Sister Aloysius is the principal of a Roman Catholic Grammar School in the Bronx. With a reputation for tenacity and merciless determination, she goes head-on as she attacks the moral character of a charismatic parish priest, Father Flynn.

Time magazine hailed it the "number one show of the year", while Broadway.com declared it "with absolute certainty, the most celebrated new American play of the season".

Regarded as one of the finest writers of the American stage, Shanley has written over 23 plays and won a Best Screenplay Oscar award for the movie Moonstruck. His other film credits include Alive, January Man and Joe Versus the Volcano.

For low-price corporate, school or block bookings, fundraisers and charities, contact Sharon on 021 680 3962.