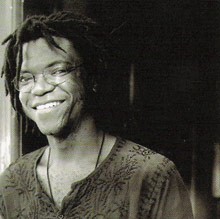 Chart-topping musician Neo Muyanga has been appointed Resident Theatre Practitioner by the UCT Department of Drama.

Muyanga is blazing his own private path as a singer/songwriter, garnering plaudits from the likes of Hugh Masekela. Familiar to South Africans as one half of the popular guitar-playing duo Black Sunshine, Muyanga is also enjoying a burgeoning solo career on the back of his debut album, The Listening Room. His single My World recently topped the SA charts.

The drama residency provides an opportunity for creative interaction between established and emerging drama, theatre, and film and media practitioners. Each year the drama department invites a distinguished performing-arts personality to work on a project of mutual benefit to the students, staff and practitioner.

Muyanga believes his songs have personalities. 'I just get out of the way,' he says, 'and let them be what they want to be.'

Muyanga will deliver a public lecture on how to improve your taste in music and other frivolous endeavours on 3 May at 18h30 in the Arena Theatre on the Hiddingh campus.