Dinner to boost learning in residences 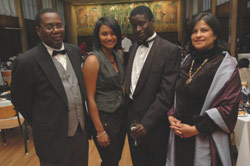 Baxter and Kopano residents donned their Friday best for their most recent high-table dinner on 13 April.

The dinner, held at the Baxter Hall on Friday evening, is part of a series of joint activities between the two residences 'to affirm common safe spaces and student residences', said Professor Evance Kalula, warden at Kopano.

West is regarded as one of the principal architects of the current system of co-operative governance in the residences, which has been credited with the development of student leadership in residences to enhance their role as learning centres.

The event is organised by the house committees.