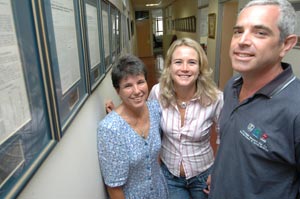 There were many questions at this week's meeting on the International Course on Physical Activity and Public Health: Africa Region, hosted at the Sports Science Institute

Couch potatoes may be the butt of many jokes, but their exercise-averse lifestyles are also a serious health concern.

Thus the meeting on the International Course on Physical Activity and Public Health: Africa Region, held at the Sports Science Institute of South Africa (SSISA) in Newlands from 27-30 March. The focus of the workshop, hosted by the MRC/UCT Research Unit for Exercise Science and Sports Medicine (ESSM) and the SSISA, is how the lack of physical activity has triggered a global chronic disease worry.

Those are the issues covered in the International Course on Physical Activity and Public Health, developed by the US' Centres for Disease Control and Prevention (CDC) and the International Union of Health Promotion and Education (IUHPE).

The aim of the document is to develop regional capacity for health promotion through physical activity.

"Non-communicable diseases are becoming an increasing burden in Africa, and they can simply be modified by lifestyle," says ESSM's Professor Vicki Lambert.