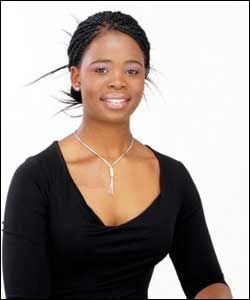 UCT opera student Pretty Yende recently stole the show in Mantua, Italy, landing the role of La Musica for the special birthday performance of Monteverdi's opera L'Orfeo on 24 February, 400 years to the day after its opening in 1607.

At just 21, Yende was the youngest among the 60 singers up for the part. More than that, she was vying against performers who specialised in the role.

That obviously didn't faze her. Yende even got her picture in the hallowed pages of The New York Times.

"It was a fantastic experience playing La Musica, and I was working with world-renowned directors and composers," says Yende. "It was an unforgettable journey."

Another UCT opera student, Given Nkosi, also auditioned for a role in L'Orfeo, and made it to the second qualifying round.

Yende's opera career started at high school, when, at 17, she won the Pirisano National Schools Eisteddfod as a young soprano in 2002. Singing was not part of her initial plans as she had wanted to study towards a BCom degree in accountancy.

But as the eisteddfod winner, she got the opportunity to study opera at UCT.

Yende came to the South African College of Music (SACM) in 2003, signing up for the performer's diploma in opera. Her first big role at UCT followed two years later, playing Helena in A Midsummer Night's Dream, produced in conjunction with Cape Town Opera.

Last year was a busy one for Yende, singing - to much acclaim - in two Mozart operas, including the UCT production of Cosi fan tutte, which was performed at the Artscape.

These days she's hard at work on her postgraduate diploma in opera performance, working with longstanding mentors Professor Angelo Gobbato and Dr Virginia Davids, and preparing for the lead role of Magda in Puccini's La Rondine.

When not jetting across the globe, that is.

"I still cannot believe that I travel the world and sing for a living," says Yende. "The motivation from my parents is what keeps me going."