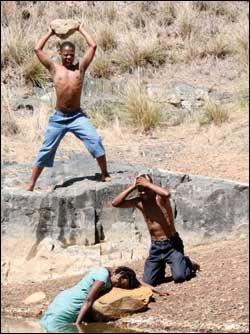 On the rocks: Buzani Kubawo, WK Tamsanqa's play on arranged marriage, runs at the Arena Theatre from 24 to 31 March.

Buzani Kubawo (Ask my father) will be staged by the UCT Department of Drama at the Arena Theatre, 37 Orange Street, from 24 to 31 March. This play deals with arranged marriage and how this tradition was practised in the ancient Xhosa world.

The play, published in 1970, tells the story of Zwilakhe, a father who ensures that the custom is kept unaltered in his family and chooses an ideal woman for his unapproving son, Gugulethu. Zwilakhe's authority divides his family and leaves him to face the consequences alone.

Like most tragedies, Buzani Kubawo touches on promise, passion and disaster.

The play was made popular as a radio drama on what was then Radio Xhosa some years ago. It remains WK (Witness Kholekile) Tamsanqa's most significant work, and it can still be found in many high school and university curricula.