A fresh look at the African diaspora 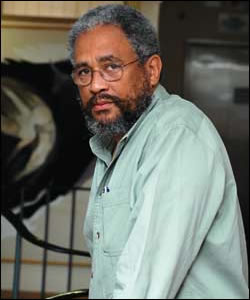 New perspectives: Prof Tony Bogues of Brown University is at the Centre for African Studies to launch a major new collaboration on the study of the African diaspora.

It's taken almost two years, but the Centre for African Studies (CAS) and two international universities are now dotting the i's on a major new partnership on Africa and the African diaspora.

Since 2004, the centre has been in talks with Professor Tony Bogues, Chair of Africana Studies and Royce Professor of Teaching Excellence at Brown University in the US, and a visiting professor at the Centre for Caribbean Thought at the University of the West Indies in Jamaica, about a collaboration among the three institutions.

The plan, says Bogues, is to hinge the initiative around a few major intellectual projects on Africa and the African diaspora. These include an October workshop at UCT, featuring the cream of scholars in the field; a score of exchanges of both academics and students; as well as a graduate course taught across the three universities.

Details still have to be finalised, but Bogues' arrival as Distinguished Visiting Scholar at the CAS just recently marks the turning of the sod, so to speak, on the collaboration. While here, Bogues is helping to pull the workshop together, and guest lecturing on a new course on African Diasporic Thought: Culture, Politics, Literature and Society, co-ordinated by Dr Nick Shepherd of the CAS.

According to Bogues, Africa and its diaspora are flush with material for study, especially for those from the three regions. The trick is to look at how the African diaspora and Africa - their culture, politics, literature and more - are tied to each other.

"When you're studying questions of ideas - political ideas, historical ideas, questions of literature and so on - you have to begin to think about the connections," he says. "Think about the relationship between the anti-apartheid movement in South Africa and the civil rights movement in the United States. Or the development in the Caribbean of a black nationalist, black consciousness movement that draws on Steve Biko."

"This three-way collaboration gets to the heart of the meaning of African studies within the continent of Africa," she says. "It does so in the sense that in this era of globalisation, the key to developing African studies is happening through the exploration of the nature of the African diaspora in relation to the continent."

But scholars may first have to redefine the study of Africa and its diaspora, cautions Bogues.

Â· Bogues will give a public lecture on September 19 in the CAS Gallery, starting at 13h00. The lecture is titled The Songs of Freedom: Reclaiming the Radical Poetics of Bob Marley and Black Freedom.