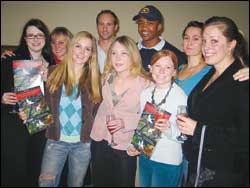 Bold, colourful and meaty. Nothing less than one would expect from a team of UCT undergraduate students launching their debut international affairs magazine, The Cape Town Globalist on the world stage.

Part of a prestigious network of Globalist Foundation magazines produced by some of the world's top universities, editor Greg Eden said the priority had been to heighten awareness of international affairs and particularly South Africa's relationship with the rest of the world. It was fitting that UCT's Centre for Film and Media Studies hosted the first edition of the publication, the first by an African university.

The theme of hope stemmed from President Thabo Mbeki's 2006 State of the Nation Address.

"South Africa has come a long way since the jubilation of 1994, but many feel that it is not far enough," Eden wrote in his editorial. "Our young democracy has passed the 10-year threshold and our country's economy is booming. We have a wonderful constitution and an increasingly important diplomatic profile and burgeoning black middle and upper class. Yet the poorest of the poor who suffered under apartheid are still suffering 12 years on, and election campaign promises are being audited and their delivery demanded."

To conclude he wrote: "Despite these challenges South Africa's most valuable export remains hope."

Centre for Film and Media Studies' HOD and director, Associate Professor Ian Glenn, was impressed by the product.

"The centre is delighted that UCT was approached to be the first African university involved in this project and grateful to the Globalist organisation at Yale for financial support for the launch issue.

"Students in the print production module of the Film and Media Studies programme have taken the responsibility for the publication and, under the editorship of former Varsity editor, Greg Eden, produced an outstanding theme issue on hope.

"I believe the students rose to the challenge of producing work that will speak to their peers at universities like Yale, Cambridge, Sydney and Beijing, and also to a broader South African public. We see this as a publication that will, in time, improve the quality and depth of South African journalism."

Eden said response to the magazine had been great.

"The directors of the foundation at Yale were very excited and complimentary. The team can be proud of what they have achieved, especially for a first attempt. We've begun the next edition and look forward to developing the project by including a wider variety of student contributions from other departments and securing support from sponsors and advertisers."