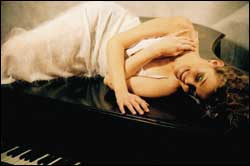 Lying, eyes closed: Amanda Tiffin will showcase her musical talents at the Waterfront.

UCT College of Music graduate will take city by storm with piano tribute.

Piano in my Pocket, directed by Shirley Johnston and featuring the multi-talented Amanda Tiffin, returns to the Mother City in June for a limited season.

The show will run from Thursdays to Saturdays from June 8 to 24 at the V&A Waterfront's theatre@thepavilion (previously Imax).

Considered to be one of Cape Town's top musical theatre productions of 2004, the show is being restaged due to popular demand.

An uplifting and joyous homage to the crÃ¨me de la crÃ¨me of contemporary pianists, Piano in my Pocket, features Tiffin, who has been hailed as one of the best singers in the country.

Tiffin not only sings and plays the piano, but conceptualised the show.

She has assembled a stellar backing band of some of the country's top session musicians, including drummer Andre Swartz; bass-player Shaun Johannes and guitarist Dave Ledbetter.

All get their chance to take centre stage and play the piano leading up to a memorable "surprise" finale that had its first audiences whooping for more.

"Combining playing piano with singing is my favourite kind of performance, and this is the first time that I've had an opportunity to do both in a theatre setting," says Tiffin, who believes the appeal of the show lies in the integrity of the music.

"Although the music is very well-known, we have tremendous fun performing such incredible music. Piano in My Pocket is definitely not your run-of-the-mill tribute show. It is classy, intelligent and sophisticated and we take pride in presenting musical theatre with style," she enthuses.

Tiffin and her musicians chose their play list with care and have incorporated songs by music legends like Nat King Cole, Elton John and the Piano Man himself, Billy Joel. The show also includes the songs of Nina Simone, Alicia Keys, Norah Jones and Tori Amos.

An additional treat for Tiffin's fans is the inclusion of three of the original tracks from her self-penned debut album, Who am I?, which will be on sale at the theatre@the pavilion during the run of Piano in My Pocket.

Like the show, the album explores the various facets of Amanda's eclectic musical passions combining pop-rock, a touch of folk music and a little jazz, to come up with a uniquely South African flavour.

Tickets to Piano in My Pocket are R95 and are available from the theatre@thepavilion at 4197661 or from Computicket.