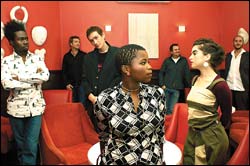 Renowned Afro-jazz group Freshlyground (above) and jazz legend Vusi Mahlasela are set to entertain Capetonians in aid of the Desmond Tutu HIV Foundation.

Freshlyground's multiracial, multinational, seven-piece ensemble will perform their unique blend of Afro beats, funk, dance, classical influences and jazz, and will be joined in song by award-winning and internationally-acclaimed Mahlasela at the Huguenot Hall on Friday, September 2, at 20h00.

Both Freshlyground and Mahlasela are dedicated supporters of the fight against HIV/AIDS in South Africa, and the concert will provide music lovers with the opportunity to support the foundation in their efforts to bring hope to people living with HIV.

Funds raised by this benefit concert will be used to finance and improve clinical care, training, clinical equipment, counsellor support and social support for patients at the foundation's medical research centre at UCT.

In South Africa, 600 people die of AIDS-related illnesses daily. The foundation is a powerhouse of committed people determined to stem the tide of HIV. Their mission is the pursuit of excellence in the research, training, prevention and treatment of HIV and related diseases in South Africa.

"Our approach to the HIV epidemic is holistic - covering awareness, treatment, voluntary counselling and testing, education and support for young people, as well as training of professional and lay healthcare workers," said Dr Linda-Gail Bekker, spokesperson and co-founder of the foundation.

Mahlasela's music gave expression to the political ideals of the anti-apartheid movement in the 1980s. He later became a peacemaker and social commentator, using his music to foster national reconciliation. He is a self-taught guitarist, poet and composer, and his music is deeply rooted in folk, African jazz and the a cappella "mbube" music style. Mahlasela has already recorded four local albums and now tells South Africa's story on a global stage with his US debut album, The Voice.

Tickets for this musical event cost R150 (R80 for students) and bookings can be made at Computicket outlets or online at www.computicket.com.