World famous playwright and author of the novel Tsotsi, Athol Fugard, will attend a memorial lecture at UCT in honour of Dr Margaret Mezzabotta, a member of staff who was tragically killed in a car accident in Cape Town in 2000. Mezzabotta, who was a senior lecturer in classics at the time of her death, was renowned for her inspirational teaching and her support of her students, as well as for her wide-ranging research interests, which included Greek drama and ancient science. These qualities were formally recognised by UCT when she received the Distinguished Teachers Award in 1997. She also chaired an education advancement programme for under-privileged students and taught many extra-mural courses, and played a major role in the Classical Association of South Africa. The memorial lecture will begin with Prof Marianne McDonald, a friend and colleague of Mezzabotta and currently a professor of classics and theatre at the University of California San Diego, speaking on Medea - The Beginning. Fugard will read a new short story, Jason - The End. The lecture takes place at 18h00 in lecture theatre 1, Kramer Law Building on middle campus, on Friday, To RSVP, please contact Sue Beele on

Even when measured against humankind's boundless appetite for cruelty towards each other, the Rwandan genocide of 1994 sticks out like a sore thumb. Here, many argued, was a carnage that could be mentioned in the same breath as the Jewish Holocaust of 1933 to 1945. In just 100 days of 1994, an estimated Rwandans - primarily Tutsis - were killed, the perpetrators members of the Hutu majority in the country. In 2004, the United Nations (UN) - who came out of the massacre with its reputation in tatters - declared of that year an International Day for Reflection on the Genocide in Rwanda. Carrying on from that occasion, UCT's Rwandan Student Society, the International Academic Programmes Office (IAPO) and members of the East African community will host two functions this week to commemorate the 1994 events, and its causes.

Here's the programme for the week: 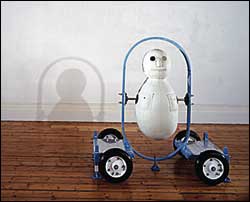 Johann van der Schijff, lecturer in new media at the Michaelis School of Fine Art, will soon host his first solo exhibition in nine years, titled Power Play. The exhibition will be on at the Bell-Roberts Contemporary Art Gallery, 89 Bree Street in Cape Town, from to running weekdays from 08h30-17h30 and Saturdays from 10h00-13h00. The show opens on Tuesday, at 18h00. Power Play is made up of pieces Van der Schijff has been working on over the past two years, using computer-aided design and manufacturing techniques. According to the artist, the exhibitions examine power relationships in society, taking as its point of departure a comment on interactive media from Lev Manovich's book The Language of New Media - "Making a choice involves a moral responsibility". "What I am consequently aiming at in this exhibition is for the viewer to be forced into a position of choice in their engagement with the work," says Van der Schijff. For more information on the exhibition, contact Van der Schijff at

Other speakers expected are UCT professor of law and president of the Competition Appeal Court, Judge Prof Dennis Davis, and Commissioner of the Truth Commission, Adv Dumisa Ntsebeza SC.

The amendment, which proposes regulating responsibility in respect of the judicial and administrative functions of all courts, has raised concern in the legal fraternity as potentially compromising the independence of the judiciary.

This is a student-led initiative.

Mama, what a show

Mamavox, dubbed South Africa's premier all-woman a cappella quartet, will perform at the new On Broadway venue, Off Broadway, on and 7. Mamavox combines the talents of some of Cape Town's top singers - Lisa Bauer, Monique Hellenburg, Mimi Ntenjwa and Amanda Tiffin. All graduated in jazz studies from the South African College of Music at UCT. Each is a renowned vocalist in her own right, but together their combined voices create sublime music and the group is fast becoming known as a musical force to be reckoned with.

"By using our voices as instruments, we are able to explore the unlimited pallet of sounds possible by the human voice," says group leader Tiffin. "[A cappella] is a challenging art form, because it's so exposed. Yet it's incredibly exciting to perform 'out-of-the-box' music." Mamavox's repertoire mixes sure-fire favourites with original material from across a wide range of styles, be it jazz or popular contemporary sounds - each with a unique South African twist. For more information on the Mamavox show, contact On Broadway at .

The Lilliput Children's Theatre Company, in association with the Baxter Theatre, will perform their brand new show, The Ugly Duckling and Other Stories, at the Baxter Theatre during the April school holidays. This delightful show will run from Saturday, to Saturday, at 11h00 daily. Tickets are R25 per person and bookings for the show can be made at Computicket, or online at www.computicket.com. For block bookings of 10 or more, or for any queries, contact Elton on or