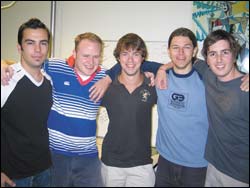 It's the highlight of the information systems calendar: third-year and honours students strutting their stuff at the annual exposition in the Jameson Hall. This year the winning honours group didn't disappoint, clocking a mega 95% for their project, a unique software solution for the Western Province Karting Club (WPKC).

The club operates from the Killarney race track, one of seven clubs countrywide. But they were struggling under the yoke of a rented proprietary timing system, with its heavy price tag and restrictive programing.

Under the banner of BreadBox Solutions, the students, Shane Thorp, Adrian Hope-Bailie, Simon Rentzke, Lee Ingram and Robert Stothers, designed an alternative timing system, incorporating a comprehensive implementation plan and quality-control measures. The saving to the club will amount to over five years.

The proprietary system the club was using was a rigid generic, leaving karting officials disgruntled and without any control over how race results and championship tallies were updated or viewed. It didn't provide a competitors' database either, a headache for the club, which often fields more than competitors at race meetings.

Significantly, the team's radio frequency identification (RFID) system, which uses a tag transponder and passive RFID tags on the karts, is a first for South African kart racing circles, where the karts reach speeds of more than 120km/hr. There are other circuits using the RFID technology - the Indy 500 for one, a championship kart race in the US.

The students' solution means the club can keep accurate records of all timed laps and events throughout the year. They are also able to display results and forthcoming events on the Internet or the WPKC website.

"Many of the clubs still face the nightmare of timing competitors using Excel spreadsheets or manual training methods," group leader Shane Thorp said. "It's laborious, time-consuming, unwieldly to manage and prone to error."

The new system also complies with the South African Racing Regulations, and the students are hoping to implement it once it has passed the Motorsport South Africa-regulated criteria and mandates.

The project brings to an end (academically that is) months of hard slog. There were some head-scratching moments for the five. The group struggled to find hardware donor for the development phase until Ipico Technologies came through.

The UCT team is chuffed: "There's always an unofficial competition among IS students, group leader Shane Thorp said. "Getting into the top three is the main aim."

But their performance took the chequered flag.