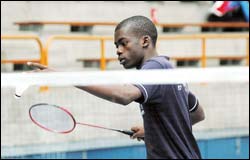 UCT students have made their mark in a string of sporting activities over the past weeks. We talk you through the highlights.

Athletics: The UCT women's team recorded another good result in the cross-country season, finishing second behind Adidas in the 8km race at the league meeting at Koeberg in July. Not bad, given that the team was without top runner Unice Vorster. Lauren Stewart was sixth (her second top six finish of the season), Helen Clark eighth, Debbie Noel (making a short comeback after six months in France) ninth and Marion Hansen, in her first cross-country race, 19th. The very next day, Noel was the thirteenth woman home in the Heart Foundation 21.1km in Durbanville.

Badminton: Medical student Phazha Pitso has been selected as the top seed for the WP Stavridis A team to defend its title at the Stavridis Cup, to be played in Rustenberg from September 24 to October 1. At the selection tournament in July, Pitso won the singles event and was also part of the triumphant men's doubles and mixed doubles pairs.

Cycling: A UCT team surprised all other comers at the Wildman Challenge, a 150km adventure race in the Garden Route area, held at the end of May. Team UCT - Norwegian ace orienteer and trail runner Ake Fagereng, hardcore American marathon runner Emily Garlough, top cyclist and ultra runner Will Robinson, "crazy" mountain-biker Moritz Thilo, seconded by Mike Sands - emerged from the Outeniqua forest at the head of the pack to take first place in the race. The race consisted of six sections involving running, hiking, paddling and mountain-biking, with plenty of orienteering to locate 14 checkpoints along the way. The turning point in the race, reports Robinson, came during the dusk hours they spent in Harkerville Forest foraging for two checkpoints. UCT enjoyed a healthy hour lead when they emerged from the forest, despite being second last going into the stage. The athletes breezed through the final two mountain-biking and hiking stages to break the tape in 33 hours 36 minutes. Only two other official teams finished the course, including a squad led by UCT information systems professor Jean Paul van Belle, part of the winning 2004 side. As the first official team home, UCT was awarded free entry to the 200km Eden Challenge in October.

Robinson has since also notched up praiseworthy results in the WP Cycling Champs. In one weekend in June, he won the gold medal in the Elite category in a 125km road race held near Stellenbosch and finished fourth overall in a 40km time trial staged along the Wellington to Malmesbury road. Then in July, he came fifth (out of 282 cyclists) in the 100km Pick 'n Pay Rotary Knysna Cycle Tour, before ending a respectable twelfth in his age group in the 162km Pedal Power Association (PPA) One Tonner. Teammate Jaco Cronje came in two spots later.

Hockey (Men): UCT suffered an untimely trip when they lost 0-4 to title rivals Western Province Cricket Club (WPCC) on Saturday, July 30, just a few games short of the playoffs. WPCC had beefed up their team with two SA first-team signings, and three UCT players were injured on the day. "They were the good team and we didn't have our best team on the park," says UCT coach Pierre le Roux. UCT will take heart from the fact, though, that for the past few years they've always beaten WPCC in the last game of the season to take home the WP Grand Challenge trophy.

Hockey (Women): Time was when UCT would crumble under the onslaught of their University of Stellenbosch rivals. But a win against the formidable Maties team in the recent Sassu games has bolstered UCT confidence. And although they still lost to Maties on July 30, the 1-3 defeat was a far cry from the usual Stellenbosch goal spree. But UCT coach Charlie Stuart thinks his team could have made things thornier for their rivals. "It's certainly better," he notes, "but I'm disappointed in the way they scored their goals - we made mistakes."

Lawn Bowling: Trish Steyn, a staffer at the Graduate School of Business, has been selected to represent South Africa at the African States tournament in Botswana in September, and the Commonwealth Games in Melbourne, Australia, in March 2006. Steyn, said to be at her best when under pressure, is one of five WP players in the Commonwealth Games squads. The cap follows her standout performance at the Women's World Bowls Championships at Royal Leamington Spa in England last year when she steered the SA team to victory in the triples event. Steyn is also a past Commonwealth Games gold winner.

Rugby: FNB UCT is back on the winning path. After a torrid time in the first half of the season - they finished bottom of the log - the side beat FNB Victorians by 20-13 at Newlands in their first game back after the mid-year break. They then hammered Durbanville-Belville 42-3 last Thursday. Fans will hope that the side has now turned a corner.

Despite that poor run, the team's Craig "Krusty" Kleu has been one of the more consistent performers. And now he's been rewarded with an early taste of international rugby. Kleu captained the SA student team that took on the African Leopards, a development side made up of players from 15 African nations, in the curtain-raiser to the Mandela Challenge test match against Australia at Ellis Park, played on July 23.

Tennis: The UCT tennis club will enjoy some top-flight competition next season. The women's side finished top of their WP league and have been promoted to the premier league. "Cracking the whip is starting to pay off," says coach Jackie Booth.

Water Polo: UCT's Lukholo Mlisana has been named for the national U20 men's team to play in the Junior World Champs in Argentina in October.

Sassu Bloopers: In last week's edition, we mentioned that no UCT players featured in the WP basketball side that competed in the July Sassu games. We've since been informed that three UCT players - Nonkosi Mngxali, Liako Mokobori and Imelda Seymour - were actually in the team. We apologise for the error. We also omitted to mention that Dintlenyane Nicky Keitsile and Phazha Pitso paired up to win the mixed doubles plate final at the badminton games at UCT, trumping a Maties team. Finally, we've seen (in the always delightful pages of Varsity) that a UCT fencing team also took part in a Sassu competition over July. At the event, staged by Wits University, three UCT men won bronze medals - James Gordon in foil, David Moore for epÃ©e, and Hsin-Yu Wei for sabre. Team captain Tracy Booysen took silver in the women's foil competition. In the team events, UCT fared much better, the men winning foil and epÃ©e. A men's second team also finished runners-up in foil, as did the women in their foil event.