UCT runners hotfoot it along with other Comrades 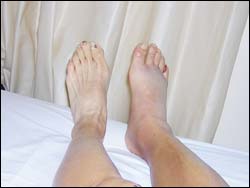 Starting off on the wrong foot: Dr Tamara Hew-Butler's scraped left knee and the swollen right foot she suffered during her first Comrades Marathon.


Groote Schuur cardiac surgeon Dr Andrzej 'AO' Okreglicki was the first UCT runner in at 08:48:35 - his best time for the down run - which earned him the half bronze, half silver Bill Rowan Medal awarded to those who finish in under nine hours, as well as the UCT club's floating trophy for the next year. Okreglicki now has four Comrades under his belt. (Thanks to the race, he's clocked more than 1 700km for the UCT club's athletics year, and, with two months still to go, has already bettered the 1 600km record he set last year.)

Associate Professor Kevin Rochford of the School of Education was the next one in, finishing in 10:05:32 and setting a new UCT record for the 60-plus age group for the down run. This was Rochford's 16th Comrades. There's obviously something to be said for the wisdom that comes with age - this year 60-year old Rochford eclipsed the time he recorded on his maiden run in 1972. He even bucked the general trend and covered the second half of the race much faster than the first, by all of 18 minutes in fact. "I had a lovely run," he says.

Next home was American Dr Tamara Hew-Butler (10:34:17) in her first Comrades. "It was everything I expected, and more," says the researcher, currently based at the UCT/MRC Research Unit for Exercise Science and Sports Medicine (Essm). Hew-Butler is the first woman in the club to finish the race since 2002. Her marathon was almost over before it got started, though. Swept along by the throng just after the starting pistol went off, she fell and popped her ankle. She kept going anyway after getting on the Comrades' 11-hour bus, a huddle of runners that nurse each other to the finish line before the cut-off. That defiance came with a price though - an ankle than ballooned during the race, two weeks in a cast and on crutches, and no running for about a month and a half.

Chemistry PhD student Shane Stone (10:38:53) and June master's graduate Simon Woodford (11:58:11) were the other two UCT runners to finish before the final gun.

Another UCT staff member to take part in his first Comrades was Roger Arendse (an inspired 09:18:05) (pictured left), organiser for the Academics' Association who runs for Mr Price Celtics.

"I am very pleased to announce that I survived all 89.17km of it, with limbs, mind and soul still firmly intact," Arendse reported to Monday Paper shortly after the event.

"Okay, the pain and stiffness were there. But the joy and fulfilment of crossing the finishing line at Sahara Kingsmead stadium in Durban to the thunderous roars of the crowds, and then the receipt of my medal were more than adequate therapy and reward."