Queen at the Ballet 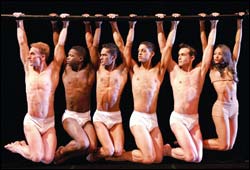 Cape Town City Ballet's 2004 stage spectacular Queen at the Ballet returns to the Artscape Opera House in April for only 14 performances. The December season sold out completely and tickets are being snapped up quickly for the upcoming run.

"Over the next few months, Cape Town audiences will be seeing quite a few grand-scale productions," says CTCB publicist Andrew Warth. "Queen at the Ballet is the one you simply can't miss. And all the creative talents involved are from the Mother City, which makes us extremely proud."

Award-winning choreographer Sean Bovim's tribute to Queen, one of the greatest rock bands in history, is more than just a ballet. It's an evening of fine musical performances, a staging extravaganza, a fashion show and a vibrant celebration of dozens of different dance styles.

If you missed out on the debut, make sure you catch it this time.

Queen at the Ballet opens on Saturday, 30 April, and runs until Sunday, 15 May. Book at computicket or Artscape Dial-a-seat