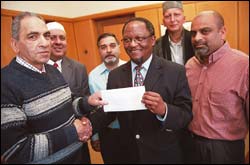 Doing their bit: Obaid Dawray (left) of the Hospital Welfare and Muslim Education Movement hands over the group's latest bursary contribution to vice-chancellor, Prof Njabulo Ndebele, with the organisation's (back, from left) Abdussamad Khalfe, Mohammed Omar, Nazeer Khalfe and Khalil Sayed in attendance.

The Hospital Welfare and Muslim Education Movement (HWMEM) counts among UCT's longest-standing patrons. The organisation has, like clockwork, been making annual contributions to the university's bursary coffers since the early 1960s.

Recently five executive members - including UCT staffer Mohammed Omar - from the HWMEM paid their 2004 visit to vice-chancellor, Professor Njabulo Ndebele, to drop off the movement's latest cheque, worth R119 000, to go towards its loan scheme at UCT.

About 33 students, of all genders and races and creeds, will receive loans from the scheme this year. The students are under no commitment to repay the interest-free loan, but are encouraged to do so and thus help out another generation of students.

The HWMEM, established early in the 1940s as a welfare programme for the Muslim community, set up the scheme in the 1960s with a nudge from its political stalwarts who argued that liberation and education go hand in hand.

The backdrop may have changed, but many of the issues haven't, says the organisation's education secretary, Nazeer Khalfe. Investment in education remains a fundamental principle in the HWMEM's thinking, he adds.