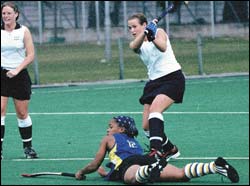 Flat out: Shannon "The General" Turner goes for goal as Wits University's Linda Kota puts in a despairing dive in the final of the B section at the recent SASSU games. Turner's teammate Lyndsey Harwood gets ready to cheer.

It was the closest thing to a cakewalk.

The women's hockey team cruised to a 6-0 triumph over Wits University in the final - its fifth in six years - of the B section of the SASSU hockey games, hosted at UCT recently. That win was the perfect note on which to wind up a tournament over which the side chalked up 68 goals in its six games. In the round robin games on its way to the final, the side brushed aside the University of the North by 24-0, Central University of Technology 8-0, Cape Technikon 6-0, Wits Technikon 22-0, and Wits University 2-0.

But while the in-field players all got into the action, goalkeeper Robyn Silverstone could recollect touching the ball only once over the tournament. And her back-up, Khanyisa Mbopa, had to boot just one ball away when she came on as replacement in the second half of the final against Wits.

With the victory also came promotion to the A section of the competition. But after stumbling at the final hurdle four times previously, some may have doubted the side would ever get out of the B section.

Not so coach Charlie Stuart. "Today is the day," he predicted confidently about 30 minutes before kick-off. And that wasn't mere hubris. The side is enjoying its best season in the Western Province Grand Challenge, lying just behind the University of Stellenbosch. And both Stuart and men's coach Pierre le Roux feel that UCT could have been vying for a spot among the top four teams in the SASSU A section.

"We were far too good for the B section," said Stuart. "With the preparation that we did and the level of play, there was no doubt in my mind that we were going to win."

More good news came after the tournament when it was announced that Natalie le Brun and Tammy Kruger had been selected to the national student squad, a side that may see some international competition early next year.

If there was a low point at any time over the tournament, it came late in the first half of the final when Kruger was felled by a point-blank shot to the side of her head. Groggy from the blow, she was led to the dugout where she was consoled by suitably sympathetic teammates. But, reported Stuart, his player rallied and staged a "miraculous recovery" to join the team for celebrations on the evening. A bump on the head is one thing. Celebratory champers is another.