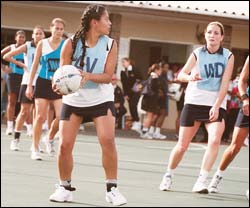 SOS: Lyndall Daniels looks for support in UCT's game against Cape Tech A.

Immediately after their 13-63 bashing from Cape Tech A on May 15, the players gathered around for a long heart-to-heart. Even a few tears were shed, understandable in the light of four heavy defeats in the side's first four matches in the WP Super League. Defeat is a bitter pill to swallow for a team that won all its matches in the A league last year.

But there are mitigating factors, say fans and players. Rival teams have players that have been competing side-by-side for years, while the young UCT players have only been together for two years.

In addition, UCT lost its 2003 goal shooter. This compelled the side to draft the inexperienced Hilda-Mart du Toit, who's only been playing netball for some three years, from the third side into a very critical position in the top WP league. Here, week after week, she goes up against some of the country's most talented defenders. A little out of her depth at the moment, Keeyan Dick, one of UCT's more seasoned players, is optimistic that Du Toit will quickly adapt to the pacy, more athletic Super League game. "She's going to do fine," says Dick. "She'll get better."

Dick echoes the sentiments of her captain, Palesa Mokomele, about what is required of the side over the next few months. "We just need to work together as a team," she notes.