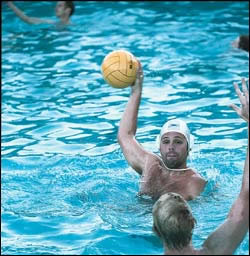 Water fun: Cablan Khaled gets ready to launch a shot at goal during a water polo practice session.

The UCT men's side rounded off a prize 2003 season by taking top honours at the SASSU water polo championships, hosted by Wits University in December last year.

One of nine tertiary institutions at the games, UCT won all four of its round robin matches to qualify for the first semi-final berth. Among its first round victims were tournament favourites, the University of Natal (Durban)(as it was known before its merger with the University of Durban-Westville), UCT coasting to a 10-3 victory.

The side then beat out Rand Afrikaans University by 9-7 in the semi-final.

In the final, UCT had to go up against UND for the second time in the tournament. This after the much-improved Durban students had beaten Stellenbosch in its semi-final.

The first half of the final proved a tight affair, but UCT eventually overran their opponents, winning the match by a comfortable 11-7 margin.

In the women's event, the unfancied UCT women's side proved to be the surprise package of the tournament, making it - against the odds - to the semi-finals where they were just pipped by Wits.

A number of UCT men caught the eye of the national selectors with their sterling performances. Gareth Samuel was selected for the SA squad to travel to Egypt in March for a world championship-qualifying tournament, while Cablan Khaled, Travis Williamson and Jonathan Palmer were invited to play in a pre-tour Springbok camp in January.

After such a choice 2003 season and their promising start to the new year, expectations are high for 2004. Especially as new recruits will include SA player Jamie Walters and SA under-20 member Paul Brewis.

Anyone interested in joining the UCT water polo club's popular 'Jaboolie' social league on Wednesday evening can give Cablan Khaled a call at 082 445-4533, or check out any of the sports notice boards around campus.