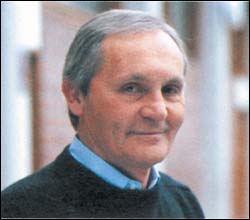 The law faculty's Professor Michael Blackman, a graduate of UCT, Harvard and Cambridge, died on January 7 after a brave battle against liver cancer, less than a week after his 65th birthday.

He succeeded Professor Jimmy Gibson in the Chair of Commercial Law at UCT in 1984.

At the recent memorial meeting in the faculty, Dean of Law Professor Hugh Corder described Blackman as an extraordinarily distinguished scholar, teacher, researcher and "reluctant" administrator.

"Mike headed the Department of Commercial Law for several terms, spanning about 12 years," Corder noted. "He taught corporation law to the final year LLBs from 1984 until 2001. A pioneer in advanced company law at LLM level from the mid-1980s, he lent critical support in setting up the postgraduate Diploma in Tax Law, the precursor of today's thriving LLM."

Corder said that it had also been due to Blackman's efforts that the UCT Labour Law Unit had been established.

"He did not have a keen interest in labour law, but he swiftly recognised the need to create the unit in the early 1980s and, more so, grasped the importance of acquiring an asset such as founding director Clive Thompson."

In his written tribute to Blackman, Judge Dennis Davis, an honorary professor in the faculty, said: "At a time when intellectual debate was not exactly encouraged in this faculty, Mike provided a great measure of space to people whose views were not necessarily shared by him."

Blackman was awarded the UCT Book Prize in 1998 for his LAWSA volumes on Companies. He was made a Fellow of the University in 2000 and, only a few months ago, was one of the few professors across the university community rated worthy of an award for excellence in terms of the new remuneration policy for academics.

In his tribute, Judge Davis summed up Blackman's intellectual interests: "Michael probably will be best remembered as South Africa's greatest academic company lawyer, but this unique role notwithstanding, it should not be forgotten that he also had a deep interest in jurisprudence and that he completed a doctorate on the work of HLA Hart."

He continued: "Like Hart, Michael was a true liberal. It was his tolerance of differing views and his relentless intellectual curiosity which, for me, remain two of his most endearing qualities."

In his tribute, Professor of Public Law Tom Bennett said that Blackman had been set apart from his colleagues by his principled individualism; a refusal to accept conventional wisdom or to submit to the dictates of superiors.

"His maverick views resulted in provocative new ideas, spectacular pieces of writing and constant challenge to those in power and authority. In all this Mike pointed us to the model of academic enquiry."

He will be sorely missed by the university's staff and students and the wider legal profession.