Khotseng looks into the future of Student Affairs 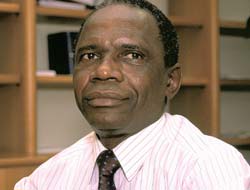 "The honeymoon was brief," answered Dr Benito Khotseng, the recently appointed Deputy-Vice Chancellor of Student Affairs and External Relations, when asked about his first three months in office.

Khotseng who officially took up office in February, said that he had initially hoped that he would have more time to familiarise himself with the Campus and its various facets, before launching into his rather intimidating portfolio. "These last couple of months have been very exciting, and I am grateful to the Vice-Chancellor and the rest of the staff for welcoming me so warmly. Even though my first few months have been very busy, I am thrilled by the prospect of what is to come," he remarked. "The task is big but I have a wonderful team in the Student Services and International office."

Though thrilled by the challenge of the "very wide and exhaustive" portfolio, Khotseng admitted that he was at first overwhelmed by the size and diversity of the University's student body, but in his opinion "the diversity at UCT is what separates it from various other campuses in South Africa".

Formerly the Vice-Rector at the University of the Free State, Khotseng has had plenty of experience dealing with student bodies and says that his current position allows him the opportunity to further his ambitions of working with the "future leaders of South Africa and the world".

In fact he and his team, which comprises of the Dean of Students, the Director of the International Office and the Director of Residences, have already pinpointed crucial areas that need immediate attention, such as the transformation and promotion of student governance and the culture of learning.

"The SRC is the only statutory body that represents students at all levels in the University Governance structure so its efficiency and effectiveness has to be maximised," he explained. "It should be supported in all its endeavours to articulate the student voice."

Khotseng said that one of the ways that this could be done was by empowering the SRC at all levels of governance so that all student structures could "value and appreciate the leadership of the SRC, not seeing themselves in competition with it, but deriving their legitimacy from it".

In addition, he is also looking at the areas of student health, HIV/AIDS education, and external academic programmes that will facilitate and broaden links with appropriate external partners in Africa. Creating an ideal campus environment that will promote the culture of learning and success among students is uppermost on his agenda.

"Whatever we do through student governance and other structures must assist students to succeed and excel as future leaders," Khotseng said.

"Residences must also be transformed to be supportive of this goal."