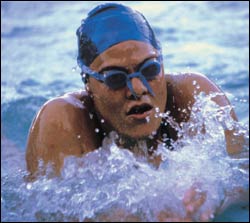 In the swim: After a hectic year of laurel-snaffling, Natalie du Toit has also been named as UCT's Sportsperson of the Year.

South African swimming darling Natalie du Toit, barely a week after winning gold at the All Africa Games in Nigeria, has snagged yet another laurel - the 2003 UCT Sportsperson of the Year award.

Du Toit, whose lower left leg was amputated after a scooter accident in 2001, was awarded the prize in absentia (she was preparing for the Afro-Asia Games in India) at the annual UCT Sports Awards Dinner, hosted at the Cape Town Holiday Inn last Friday evening. The honours came just a week after the BSc student's remarkable 800-metre freestyle (the open event) win at the All Africa Games on October 7.

Du Toit has picked up a host of awards this year, including the Western Province Sportswriters' Association (WPSA) sports star of the year honours (in both the women's and disabled women's categories) and three bronze medals at the Telkom South African National Aquatic Championships. In June, after an invitation from the International Paralympic Committee, she also shattered the world record in the 100-metres freestyle exhibition race at the FINA World Championships in Barcelona

In addition to Du Toit, a host of other sporting students were lauded at last week's bash. Among these were the members of the yachting and mountain & ski clubs, who shared the Club of the Year award.

The men's hockey first team - who this year bagged the WP indoor league trophy, the WP Hockey Union (WPHU) Grand Challenge trophy and, their crowning glory, the national Champion of Champions trophy - scooped two prizes: the Performance of the Year and Team of the Year awards.

In turn, Paul Delport was presented with the Best First-Year prize. Delport led the national side to victory at the world under-19 rugby championships in France in April this year, and has become a fixture in the WP under-20 line-up.

He has also been nominated by the International Rugby Board (IRB) for its under-19 rugby player of the world award.

In a first for UCT, a blind student was also honoured with a sporting accolade last week. Siphiwe Mashawu, who this year completed three half-marathons (including the Two Oceans and Gun Run races), received the Chairperson's Award, made by Professor John Simpson, chair of UCT's Sports Council, for a special achievement in sport.

"We thought that last year was exceptional," observed John Donald, director of sports and recreation at UCT, "but this year has surpassed even that in terms of the achievements of both teams and individuals."