The life of a character actor 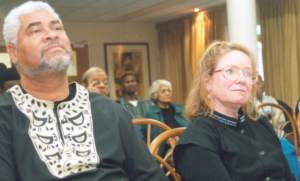 
TO ROUND off All Africa House's series of seminars for 2002, warden Dr Sagadevan Mundree called former and current Fulbright scholars in Cape Town – and beyond – together for a Thanksgiving presentation and dinner on November 22.

Mundree, himself a former Fulbrighter, managed to convene a number of South African and American scholars for the event. Guests included Monica Joyi, programme manager at the Fulbright Commission, as well as Terence Fredericks of the District Six Museum and Lennie Thomas, both Fulbright alumni.

Guest speaker at the Thanksgiving was Professor Charles Dumas of Penn State University's Department of African/African American Studies and its School of Theatre, who spoke on the African Roots of African American Theatre.

Dumas, who is presently a Fulbright Scholar at the University of Stellenbosch's Drama Department, is also a professional actor, writer, theatre director and filmmaker, and has appeared in films such as Die Hard III, Copland, Deep Impact and Peacemaker, and was also a regular on television's Law & Order, among other series.