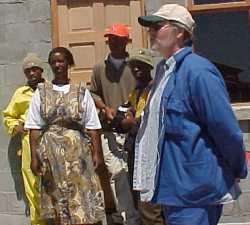 Bricks and mortar: Prof Danie Visser (right) of the Department of Private Law and Khayelitsha residents inspect the house built by Habitat for Humanity.

In an outreach that is one of several similar endeavours at UCT, a team of 10 set off to assist Habitat for Humanity build a house in Harare, Khayelitsha. The exercise was the brainchild of Professor Danie Visser (Private Law), but the Faculty quickly embraced the idea. Over the ensuing week some 50 people derived much satisfaction from watching a home rise up from a basic concrete slab.

The house, worth R30 000 and comprising a kitchen/living room, two bedrooms and a bathroom, was handed over to the homeowner, who hails from the Eastern Cape, at noon on the Friday.

To qualify for a Habitat home, she had to own the land and commit to 80 hours of work on the project. In addition, the grant must be paid back over five years. In turn, the funds are ploughed back into the organisation, which is building homes not only in Khayelitsha, but all over the Cape and in 18 other African countries.

Commenting on the ready involvement of so many of Law Faculty staff, Corder said that outreach was not a â€œonce off exerciseâ€ but part of the way the Faculty was involved in the community, not only in Cape Town but further afield, too, via various initiatives.

â€œI think of the recent ethics training by the Law, Race and Gender Unit of 30 magistrates on Robben Island, of initiatives to create awareness of the new Domestic Violence Act and of Criminology's research in assessing where we can help the system deliver justice. There is the Labour Institute's work with farm labourers and, of course, the work of the Legal Aid Clinic, which sees hundreds of people every week,â€ he said.

Nevertheless, Corder said, the unusual nature of this work had represented â€œsomething differentâ€, and had involved a single, concentrated focus by many â€œready and cheerfulâ€ people in the Faculty.

â€œThank you to all involved, to Danie for initiating the project, and to Habitat for Humanity for making it possible.â€