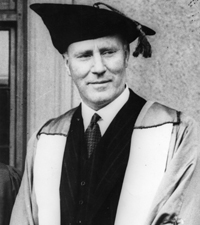 TB Davie led the university during the crucial development years post World War II, from 1948 until his death in 1955. He is remembered as a fearless defender of the principles of academic freedom and this legacy continues in the memorial lecture series.

The policy of successive Nationalist Party governments since 1948 was to entrench segregation through legislation. The first such legislation dealing with universities, the Extension of University Act, No 45 of 1959, was enacted by Parliament in the same year.

Controversial in its mandate, the Act provided that no black person who was not registered as a student in one of the existing, mainly white South African universities when the Act came into operation on 1 January 1960, might attend that university without the written consent of the responsible minister.

From the time it was first mooted, UCT opposed the draft legislation that became the Extension of the University Education Act.

On 12 December 1956, the Council passed a resolution opposing, in principle, academic segregation on racial grounds. On 7 June the following year, members of the UCT community marched through the streets of Cape Town to protest the introduction of the Act.

UCT was joined by Wits University, contesting every step the government took to place this plan on the statute book, as did many other political opponents and organisations. Nevertheless, the Bill became law in 1959.

Years later, in 1983, the government introduced a Bill to repeal both sections of the Extension of University Education Act regulating the admission of students to universities. At the same time, however, amendments were proposed to the Universities' Act to allow the minister to set conditions subject to which other population groups might be admitted.

The amending bill was vigorously opposed by UCT, Wits and the Universities of Natal and Rhodes. Nonetheless, the Bill passed into law as the Universities' Amendment Act, No 83 of 1983, and the provisions allowing the minister to set conditions regulating admission became law.

In November 1983, the minister decided not to exercise the power to set racial quotas. He did, however, set a condition: that African people would require the written consent of a minister to register for undergraduate degrees and diplomas in medicine, paramedical programmes, nursing and surveying. In 1985, the minister withdrew this condition and in 1991 the offending clause in the Universities' Act was repealed.

In 1959, former chief justice and UCT chancellor, Albert van de Sandt Centlivres, delivered the first lecture, grounded in a speech he delivered on the subject of academic freedom at the University Club and printed in the Rand Daily Mail two years earlier:

In 1961, intellectual activist and struggle icon ZK Matthews delivered the third lecture, titled African Awakening and the Universities. (The atrium in the Hoerikwaggo building, home to the Centre for Higher Education Development (CHED), was later named after him.)

By the time ANC stalwart Walter Sisulu delivered the 30th TB Davie Memorial Lecture in 1990, his title, The Road to Liberation, reflected a legacy of that awakening.

Guest speaker in 1999, Nobel-winning Nigerian writer Wole Soyinka, threw the spotlight back onto liberation, drawing attention to African's plight - a continent plagued by civil war - in his lecture, Arms and the Arts: A continent's unequal dialogue.